John Milne was a founding member of SADDSA in 1971. 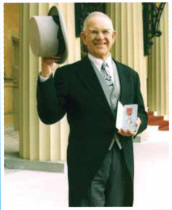 His work with-in the driving instructor industry was legendary. John Milne MBE died on 22 June 2006 at the age of 77, the President of both the Approved Driving Instructors – National Joint Council (ADI – NJC) and the St Albans and District Driving Schools Association (SADDSA).

In the early 1970’s, just after the ADI Register became compulsory, John was a founder member of SADDSA and became one of the first ADI-NJC tutors before becoming their Head of Training. He was a firm believer of Continuing Professional Development (CPD) and included City and Guilds 730, Certificate in Education, Cardington ‘A’ driving test and NVQ assessor levels 3 and 4, amongst his own qualifications.

Due to his commitment, knowledge and experience, John sat on various committees and working parties, including a period as Chairman of the former St Albans and District Road Safety Committee. He was a member and former chairman of the Institute of Master Tutors of Driving.

He was awarded the MBE in 1997 for services to the industry.

DSA’s Deputy Chief Driving Examiner and Manager of External Trainer Development, Trevor Wedge said: “John was a true gentleman, who will always be remembered for his total dedication, professionalism and enthusiasm for his profession, the ADI-NJC and St Albans and District Driving Schools Association.

It was a real pleasure and privilege to have known him and worked with him on so many occasions. He will be sadly missed by all who came into contact with him”.